This forum is for discussions on Dungeons & Dragons, Everquest, Chess, and other games that ease the pain of being an aging geek.
Post a reply
First unread post • 15 posts • Page 1 of 1

The Force Foundation is a military supplier for high-tech weaponry founded by retired air-force general Walter Force. It is little known to the general public, but held in high-regard among the country's military leaders.

As one of the early stealth fighter pilots, Gen. Force learned the value of having superior technology in any battle. As an heir to a rather large fortune and a life-long patriot, he created the Force Foundation. The purpose of the foundation is to recruit and hire the brightest scientists and engineers to design the nation's next generations of weaponry, primarily for homeland defense.

Thus, top secret projects are the daily bread of the Force Foundation. However, the foundation has an even bigger secret, known only to Gen. Force, a few of Washington's top-level security officers, and to the scientists, engineers, and operatives involved. That secret is... the Force armor.

The Force armor is a personal battle suit designed to protect it's pilot and give him a variety of (generally energy based) capabilities. These capabilities include projecting energy beams as weapons, energy fields for defense, and flying using energy based propulsion systems. The key systems in the Force armor are the micro-miniature atomic generators, the energy-projecting transducers, and the cybernetic control systems - all invented at the Force Foundation.

The foundation's primary test pilot is Gen. Force's own son, Lt. Gabriel Force. Gabe is one of the country's top fighter pilots and has flown many combat missions over Iraq and Afghanistan. He currently pilots two versions of the force armor, the defense version, (in which he is known as "En Force") designed to lead a special ops team, and the assult version, (known as "Superior Force") designed for maximum attack capabilities. In these suits, Gabriel has started a career fighting crime and helping to restore law and order in and around Paragon City where he lives.

Anybody else want to create a "Force" hero and join me on the Freedom server as part of "Heroes En Force"? There are several other good defender, blaster, controller, or tanker versions of the armor that could be made. It'd be cool to have an entire team, made up of "Force armor" heroes flying off to a mission.
Top

Sure. Why the hell not? That 10k could make it quite interesting. Help me with a design. Have to be red costume or is crimson (maroon) acceptable?

What archetype do ya need next?
Top

Currently in testing by the Force Foundation: The Assult Force armor

Optimized to protect its pilot, the Assult Force armor is designed to take the brunt of an attack. Capable of delivering some damage on it's own, it works best when backed up by additional ordinance.

(Tanker, invulnrability/energy melee. If you'd like this one, let me know. I'm just playing around with it and I'll gladly delete it so you can make your own. If not, I highly recommend the Defender or Controller types if you haven't played one yet. They're the most interesting. The only one I can't figure out how to make a "Force" hero for is the Scrapper, but if you have a theory, by all means do it. I plan to keep my defender (En Force) and my blaster (Superior Force). However, feel free to make another of either. I've played in groups with 2 FF defenders and it makes the party almost invulnrable. I've also played blaster-blaster, 2-man teams and they deal massive damage. Call me when you're about to create you hero and I'll log on and give you the cash.)
Last edited by Bud on Thu Sep 16, 2004 6:36 pm, edited 1 time in total.
Top

Here are a few other ideas:

Dr. Chang-kun "Charles" Choi joined the Foundation more than a decade ago. Though quiet and soft-spoken at a glance, he is a bit of a daredevil at heart. A freak event while parasailing on the cusp of Hurricane Hugo years ago cost him his right eye, but bestowed him (as he later came to learn) with an uncanny set of new abilities (which he is still trying to harness). Thanks to his achievement within the Foundation, Charles and fellow scientists have managed to begin to empower his skills with the aid of Force technology built right into his custom-fitted suit of armor.

I'm glad you were able to come along for last night's test run of the "Assault Force" armor. I'm sorry about that trip to the hospital, but we'll figure out how to most effectively use our capabilities together soon. I was glad to hear about the upgrades in the "Life Force 1" armor.

I think the Foundation's going to scrap the "Assault Force" project and merge the design team with the "Superior Force" team. It looks like there's gonna' be a quick spin of the blaster armor so that may be what I join you in next time we get together. (Although, I think they're gonna give it the "Assault Force" name - more appropriate, I suppose.)

I've also heard some resources are being diverted to a new concept that just hit the radar screen. It appears some of the engineers have invented a technique for releasing controlled amounts of radiation from the micro-miniature atomic generators along with a way to modulate it for a variety of weapons (and possibly even healing effects). So, keep an eye out for that one coming along soon. I've heard a rumor they may call it the "Quantum Force" armor.

(You guys don't think I'm taking this whole Force Foundation thing too far, do you?)

That's why they call it Role Playing.
Top

Presenting... the full line up of Force Armored Suits

En Force
This is the original armored suit by the Force Foundation. Designed to lead and protect a special operations team, it can generate strong protective forcefields and energy blasts.

Assault Force
Actually the second generation of "maximum assult" armor, this design contains a wide variety of energy-based weapons and attack capabilities. However, it lacks the force field generator of the original armored suit.

Beta Force
A totally new concept in armored battle suits, this design releases controlled and specially modulated waves of beta radiation for a wide variety of desirable effects. It is capable of emitting damaging and debilitating blasts or clouds of radiation as well as beneficial waves that can accelerate an ally's matabolism or possibly promote healing of wounds.

Life Force 1
A custom design, made specifically to augment the unique mental abilities of one of the Force Foundation's brightest designers, Dr. Chang-kun "Charles" Choi. Utilizing the Force armor's cybernetic capabilities and powerful micro-miniature atomic generators, this suit amplifies and projects Dr. Choi's mental and life-generating capabilities to the point that he can effect others.
Top

Beta poses with a couple of the other team members, Mouse Man and Life Force 1. 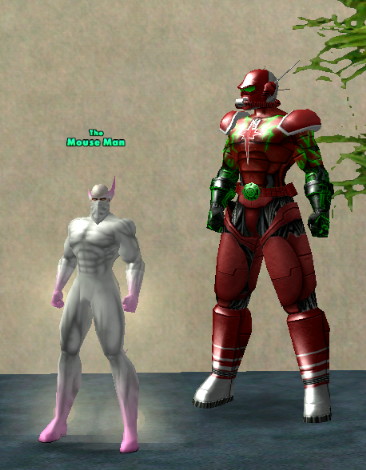 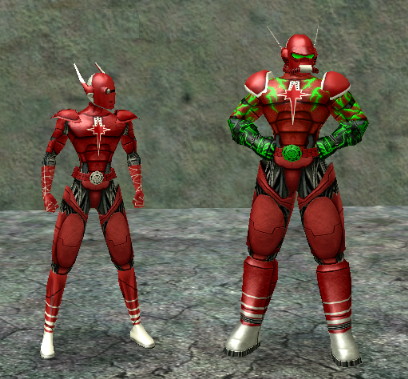 No, Beta's not a giant. Mouse and Charley (LF1) are just short.

New from the Force Foundation, the En Force Stealth armor. 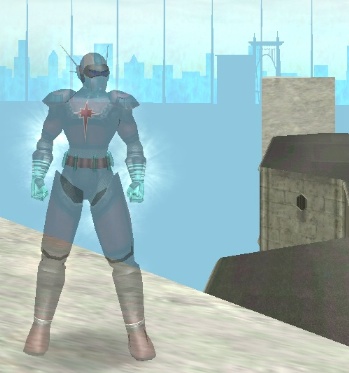 Made from top secret alloys and carbon fiber, the Stealth version of the En Force flying armor suit is designed to be practically invisible to radar. It is also coated with Liquid Crystal Display film that can show an image of that is behind the suit, making it appear translucent and very difficult to see at a distance. (See image on the right, above.)

These new enhancements will allow the En Force suit to infiltrate enemy strongholds for intelligence gathering or for defeating defenses from within.

Of course, it still has all the energy weapons and force fields as the previous version, making it a formidable weapon indeed.
Top

Damn He's Preetty.
Jeff
It's a great day to be with my wife,
my friends and alive on my planet!
Top

The hue of his gauntlets roughly match the color of his force fields. Truely color coordinated, Bud.