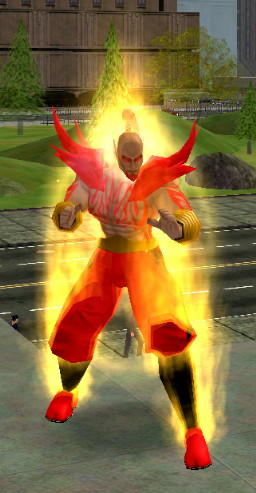 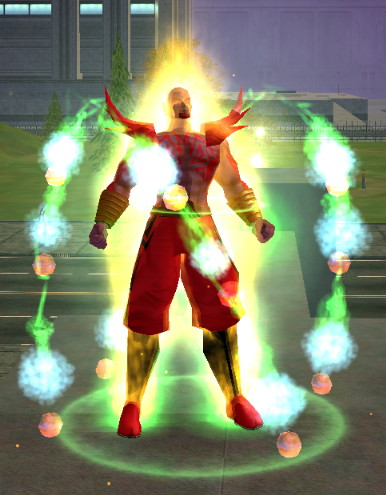 Lord Afrit is a powerful Djin lord from the elemental plane of fire. He is thinking of "annexing" our realm, but he must first eliminate the criminal element that seems to infest it. So, for now... he's on our side.
Top 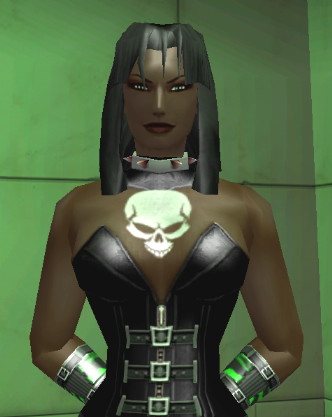 I wanted to make a voodoo princess & healer, but this was as close as I could come. It didn't occur to me that this was almost an exact duplicate of Jeff's character until I started to post her here. Oh well, you can never have too many babes. 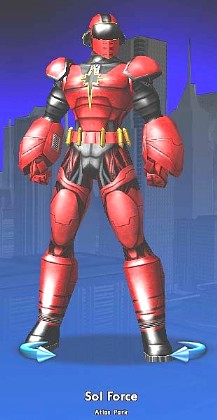 With the backing of the Force Foundation, Dr. Victor Sol has develeped and pilots, a prototype combat suit of armor for the "Heroes En Force" super group. The Sol Force armor is based off the original En Force armor but has been enhanced and reinforced to with stand more physical punishiment. Dr. Sol has also equiped the suit with a plasma force shield generator that is able to super-heat the surounding air. This provide excellent protection againts most physical attacks and can also damage surrounding objects. The original energy projection modules had to be modified however. The heat generated by the suit was over heating the projection device targeting and tracking systems, making them nearly useless as a ranged weapon system. The modified energy projectors now produce a energy field that encapsulates the users hands. The energy is then released when physical contact is made with the target.

With all labratory testing over the suit has been approved for open field tests. So far Sol Force has performed very well, however the shielding has proved to be a huge energy drain on the system. Further testing will be required to discover a way of boosting energy out put.
Top

13 Tech Controller (Mind Control/Kinetics)
aka "Dr. Charles Choi" of Force Foundation
Freedom Server
1970 - 2005
Sadly, Dr. Choi's adventurous spirit, though vibrant in life, reduced him to a bowl of Korean noodles after he plummetted to his death from a BASE diving accident in Venezuela's Angel Falls.
Last edited by Bill on Sat Jan 29, 2005 3:20 pm, edited 3 times in total.
Top 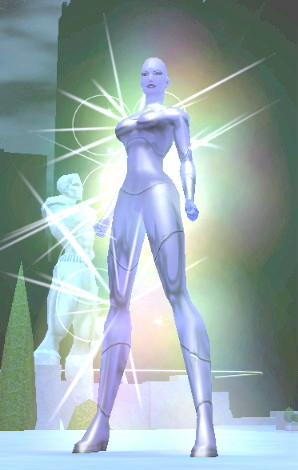 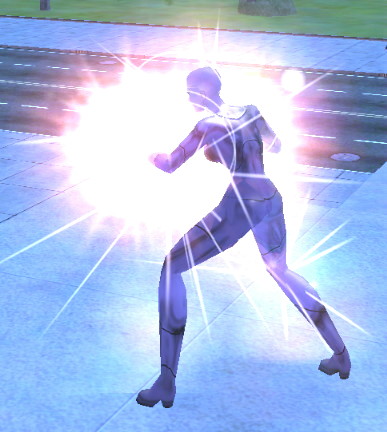 Moly was a sharp young field agent in the CIA when she volunteered for an experimental project. The Agency had developed a machine that could manipulate matter at a sub-atomic level. The intent of the project was to infuse her bones with Chromoly steel, making them extremely difficult to break. However, the machine didn't work on humans the way it did when tested on monkeys. Not only did it infuse her bones with steel, it turned her muscle, skin, and all other soft tissues into a "living" form of chromoly steel. It also enabled her to generate vast amounts of energy that she has l earned to focus and release when desired. Oddly enough, it also made every strand of hair everywhere on her body fall off.

Although the scientists have gone back to the drawing board to try to undersrtand what happened, "Moly", as she has become known, has taken on an entirely new, more public role as a super hero. She's also learned that being made of Chromoly steel attracts far more attention then being totally bald, so she's come to grips with the hair loss.
Top 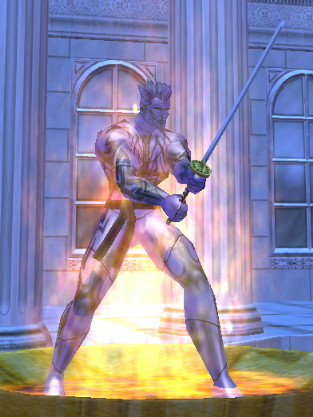 While big brother "Stainless" was pumping iron in the military, little brother "Live" was stationed in Japan with dad. He spent his time at the local Kendo dojo, learning to use a boken and fighting with the Shinai (not to mention getting full-body tatoos). Being a bit wilder then his older brother, he always wanted to play with actual "live" steel swords, but nobody would let him. Later, in his late teens, when his mutant ability to turn his body into steel emerged (same as brother's) there was nobody who could tell him no.
Top 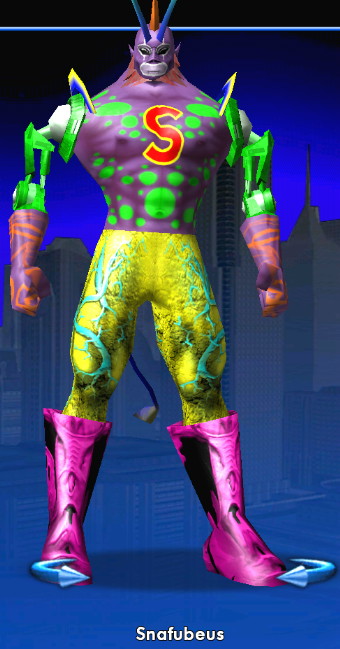 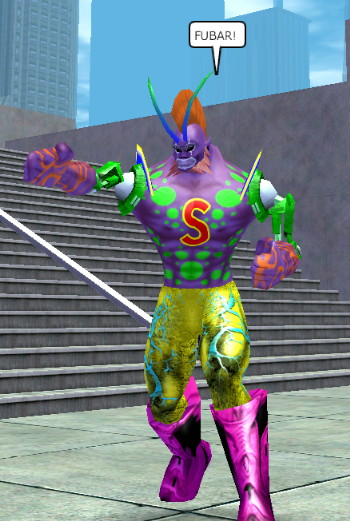 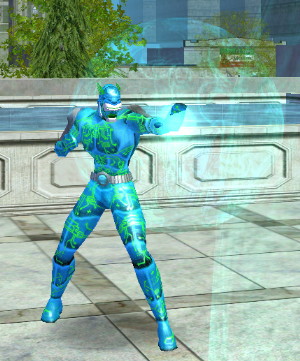 So far, I think this is one of the best controller combinations. Very useful to a team (not much good solo). However, I really don't have a good orgin story for him. Any ideas?
The theory of evolution by cumulative natural selection is the only theory we know of that is in principle capable of explaining the existence of organized complexity.
-Richard Dawkins
Top

After experimenting with the Life Force 1 and Beta Force armors, the designers at the Force Foundation combined the healing technologies and radiation weapons into a single armored suit and called it, appropriately 'Life Force 2" in tribute to the original, "Life Force 1". This armor is now in testing, piloted by Lt. Gabriel Force (when he's not piloting one of his other armored suits). This armor will eventually provide a full-featured combat medical capability for the Heroes En Force team.

(Sadly, Life Force 2 replaces the now deceased Devil's Daughter - a moment of silence please. RIP DD.)
The theory of evolution by cumulative natural selection is the only theory we know of that is in principle capable of explaining the existence of organized complexity.
-Richard Dawkins
Top 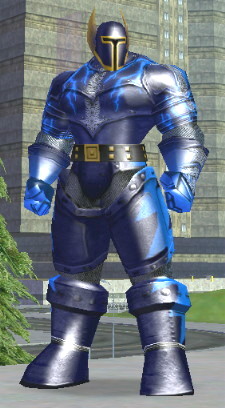 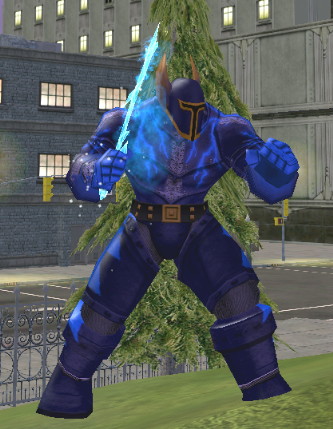 Torsdag is a little known Nordic God (Thor's 3rd cousin, twice removed), who has been sent to walk the Earth and aid its people.

(RIP Hell's Reaper. Didn't really like ice blasts.)
The theory of evolution by cumulative natural selection is the only theory we know of that is in principle capable of explaining the existence of organized complexity.
-Richard Dawkins
Top

Posting this for my godson Cody (Curt & Michelle's boy)

cody m
Technology Blaster
Fire/Fire
Pinnacle Server
The theory of evolution by cumulative natural selection is the only theory we know of that is in principle capable of explaining the existence of organized complexity.
-Richard Dawkins
Top 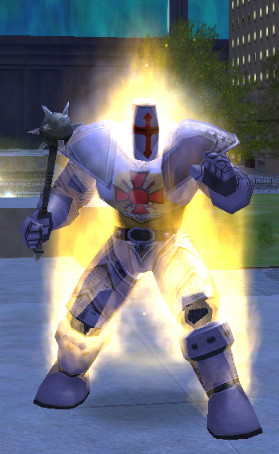 (check back later for orgin story)
Last edited by Bud on Tue Jan 11, 2005 8:35 pm, edited 3 times in total.
The theory of evolution by cumulative natural selection is the only theory we know of that is in principle capable of explaining the existence of organized complexity.
-Richard Dawkins
Top
Post a reply
59 posts • Page 2 of 4 • 1, 2, 3, 4