This thread is for posting of pictures and descriptions of our CoH toons. Feel free to discuss them here as well, but any discussion you wish to keep should be posted somewhere else as I will periodically clean this thread of non-gallery posts and deleted characters to help keep it an easy reference. 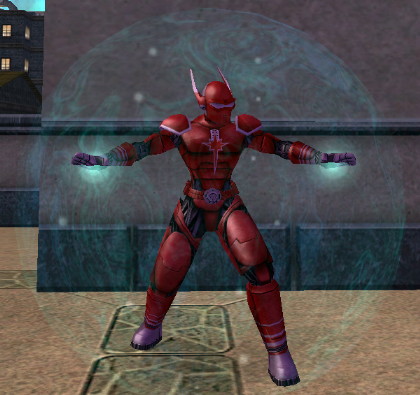 En Force is not your usual defender. He's really more of an offensive force. He didn't invent the armored suit that generates his energy weapons and defenses. However, he pilots it like no one else could.

Having gained more useful force fields and the ability to fly, En Force has started to see some real success as a hero. Thus, he's started top gather other heros who seem to know what they're doing and has created his own super group called, what else, "Heroes En Force". So far, it only has a couple of members (and there are no board meetings or duties). But,... villians be warned, the group is gathering and soon there'll be a new "force" in town. 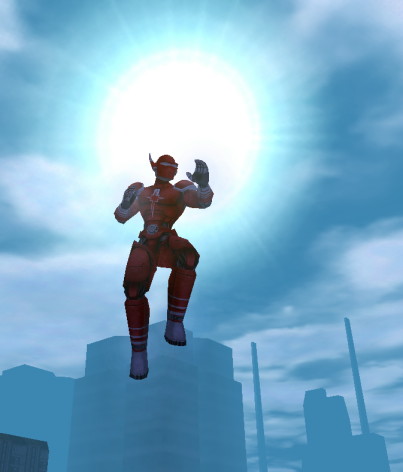 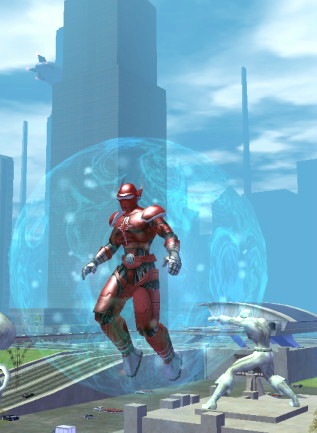 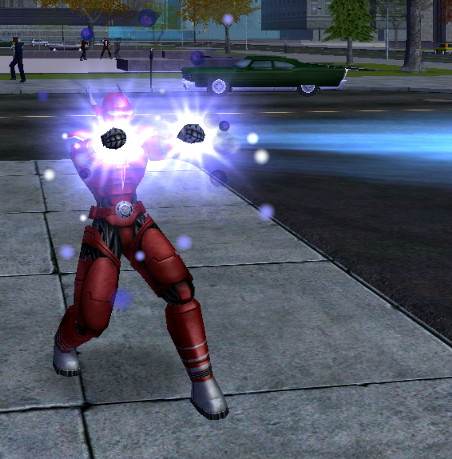 (Of course, he's the only member at this point.)
Top 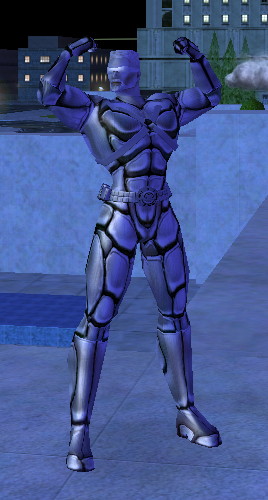 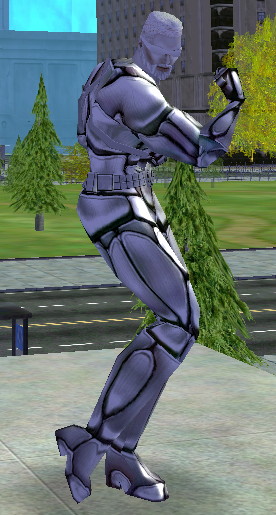 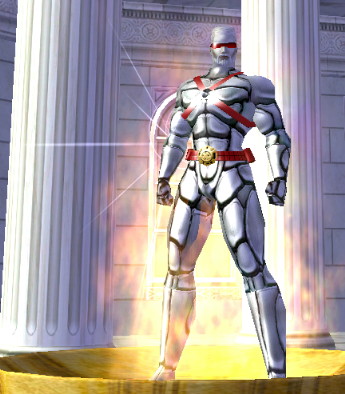 I finally made a tanker I like. Steel kicks butt! He's a mutant whose body has turned to steel and given him incredible armor, strength, and speed (eventually...

). Villians hate him, ladies love him. What more could he ask.

Steel has withdrawn from tthe "Heroes En Force" supergroup to form his own, "The Fellowship of Steel". He and his brother, Live Steel, are now looking for heroes with a steel theme (named, made of, using, wearing steel) to join the ranks of the fellowship.
Last edited by Bud on Wed Nov 10, 2004 9:10 am, edited 5 times in total.
Top

En Force Flys to the moon and back!

En Force, reveling in the joy of flight! 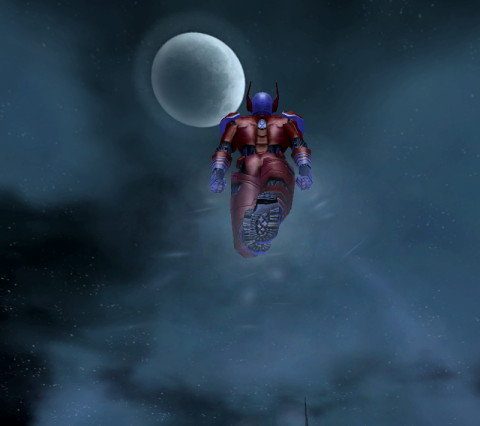 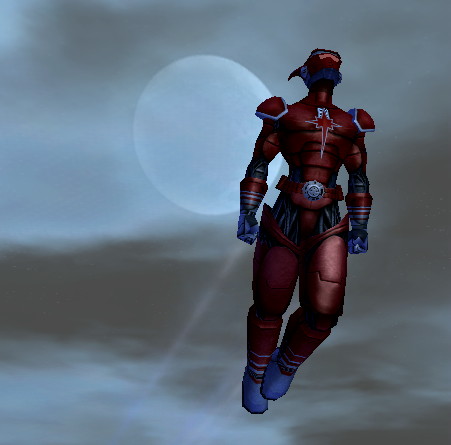 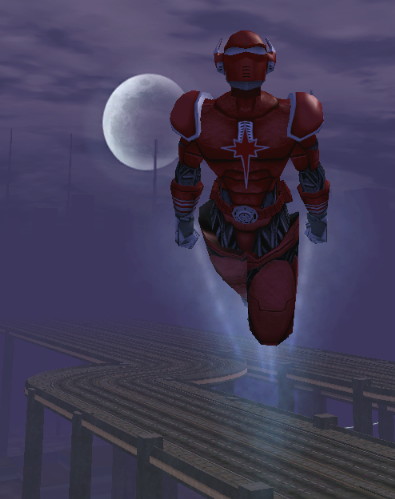 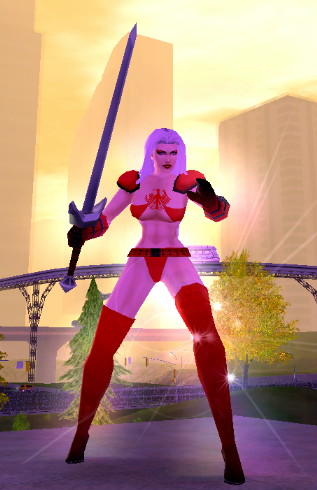 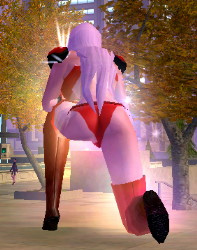 Oo!... you should create a tanker named "Hanover Fist". We could team up. It'd be great! 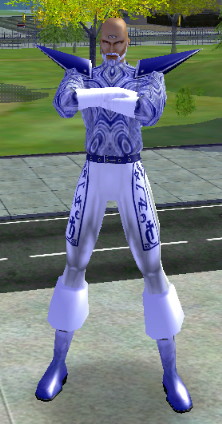 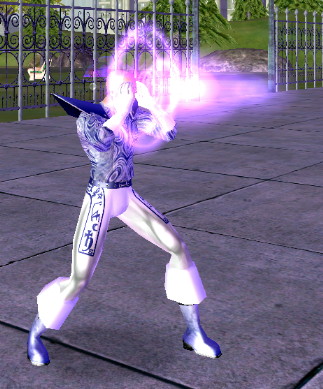 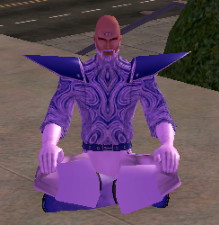 After medical school, the Psionic Surgeon (who actually is a medical doctor) studied for 20 years in a Tibetain monastary. There achieved mystical enlightenment and gained the ability to heal (or harm) people with just a thouht. (He also gained his third "eye of enlightenment", which is how he sees into the psychic dimension where he can travel briefly.) Now, he has returned to his home city of of Paragon to help retake the streets from the criminal and invading elements that threaten to overtake it.
Last edited by Bud on Sun Nov 21, 2004 3:21 pm, edited 3 times in total.
Top

Yet another re-work of the Assault Force armor 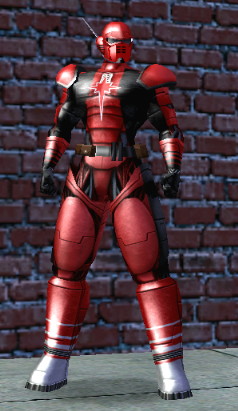 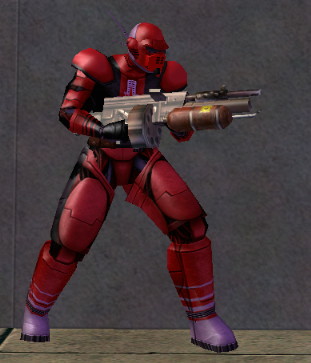 The Force Foundation designed their new super assault rifle for the Army. Unfortunately, the first time they tested it, they realized it was far too powerful for anybody to use by hand. After getting out of the hospital, Gabriel Force (who insisted on being the first to test the rifle) suggested that they make a stripped down verson of their powered "Force" armor that elite infantry might wear while using the super rifle.

Thus, the third generation "Assault Force" armor was born. The redesigned armor, stipped of the energy transducers, provides the protection and boosted strength necessary for the pilot to use the super assault rifle without injury. Since the armor has none of the secondary capabilities of the energy or force-field armors, the foundation has started developing and testing a variety of special devices to assist the pilot during combat missions.

Will this be the final version of the Assault Force armor, or will the foundation redesign it yet again (or scrap it altogether) nobody knows.
Last edited by Bud on Sat Nov 06, 2004 7:03 pm, edited 2 times in total.
Top

Presenting... The latest from the Force Foundation: 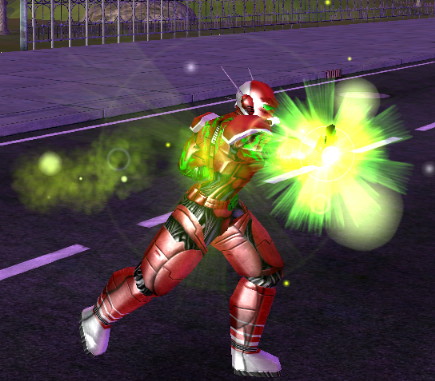 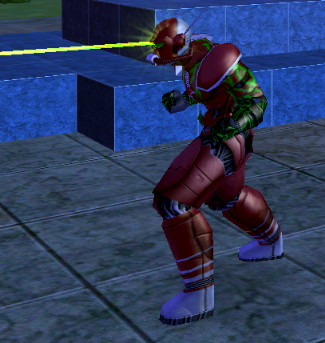 Engineers at the Force Foundation invented a way to release controlled amounts of beta radiation from the micro-miniature nuclear reactors used to power the armor as well as a method of modulating the radiation to achieve a variety of desirable effects from weapon blasts to benefecial effects, possibly including the release of healing energies.
Last edited by Bud on Tue Nov 02, 2004 7:31 pm, edited 1 time in total.
Top 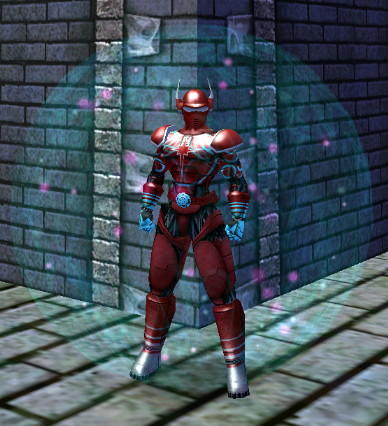 A minor, yet expensive, change in costume for En Force. Added a little color to match his FF bubbles.
Top 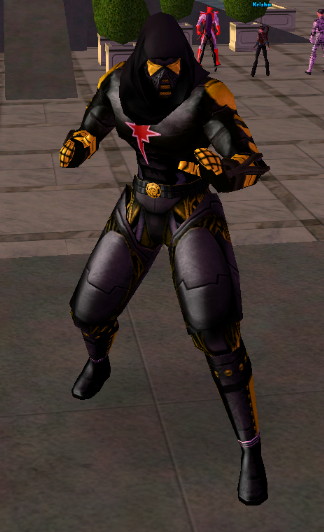 Jared Jones was working with a Black Light experiment when an explosion from the Assault Prototype bathed him in an unknown mix of chemicals making him a conduit for the energies of the Dark Dimension.
Barrowing scrap piece of Armour from the foundation, he made his own Armour only to find his powers make everything he wears black. After some experimentation he has been able to add a little color to his appearance, but not to his skin.

Force Dark started Heroing with no one at the Foundation knowing until the day he met En Force around Atlas Plaza and joined Heroes En Force. 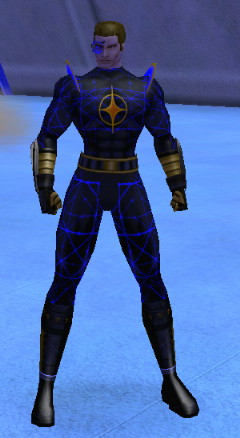 Neb is the last surviving alien from a planet so distant he can't describe its location to Earthlings. His was a race of humans far older then our own. In fact Neb believes it is the actual source of the humans that are scattered throughout the Universe.

His people were un-imaginably powerful and have naturally developed abilities that we would consider super-human. Neb himself has begun developing his abilities to manipulate gravimetric fields, kinetic energy, and to fold space itself.

Unfortunately, certain factions of his race (like Earth humans) were prone to violence and mutually destructive activity. In their struggle for power, one of these factions created a rift in space and time so large that it swallowed the entire nebula in which his planet and solar system were contained. Thus to remind himself of the fate of his people, he took the name "Vanished Nebula" or "Neb" for short.

Fortunately, some of his people had advanced warning that this might happen and were able to flee, scattering throughout the universe. Neb, chose to come to Earth and help our "young" race of humans to develop along a wise and peaceful path. Unfortunately, he was dissapointed to find the level of criminal activity already present here. So to help Earthlings avoid a similar fate, he has swarn to eliminate these criminal elements from society - a tall task indeed.
Last edited by Bud on Mon Nov 01, 2004 8:10 pm, edited 4 times in total.
Top 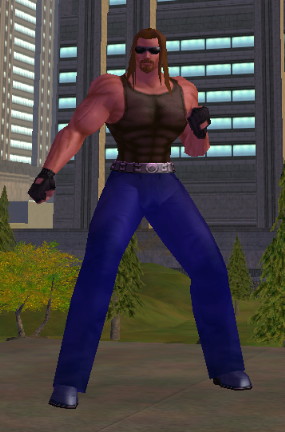 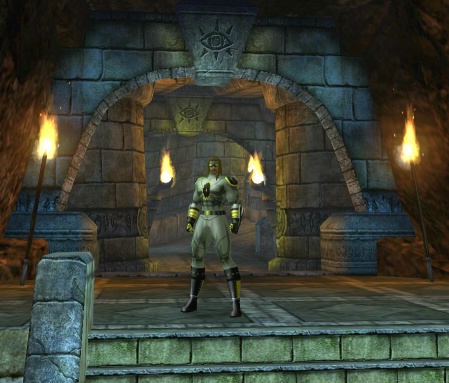 Street, on duty - clearing out a CoT temple.

Nathan Street was a six-year old kid, growing up in the poor part of town when his parents were killed accidently during a gang hit. They were just in the wrong place at the wrong time. Right then and there, that gang made an an enemy they weren't even aware of.

After his parents death, Nate became very angry and obsessed with avenging them. He began studing martial arts, living at the dojo as much as at the orphanage. His school studies began to suffer and he barely made it into High School, where he was eventually expelled. The other kids, and even some adults, began calling him "Mean Street" and avoided him as much as possible.

By the age of 14, Street had developed his skills to such a level that he single-handedly defeated the entire gang (some 30 members strong) gathering enough evidence to incarcerate each of them, with a couple of acceptions. The bodies of the actual gunmen who killed Street's parents washed up in the river, beaten nearly beyond recognition.

After battling his own demons (and a serous bout with alcoholism), Street was befriended by the local law enforcement officers who had investigated the death of his parents. Although they were sure Street had killed his parents' murderers, they had no paritcular proof and weren't inclined to push the issue. With their help, Street turned his life around and began using his skills to help others avoid the torment that he endured.

Now he has dedicated his life to developing his personal skills and to helpling local law enforcement bring difficult criminals to justice. As such, he has earned the admiration of the community and the fear of organized crime. Although still somewhat taciturn, he has become a reasonably well-adjusted guardian of society. Just don't call him "Nathan".
Last edited by Bud on Mon Mar 07, 2005 6:26 pm, edited 4 times in total.
Top
Post a reply
59 posts • Page 1 of 4 • 1, 2, 3, 4

Users browsing this forum: No registered users and 2 guests